Mostly new, but some old…

courtesy of the Alaska Dispatch
by Rick Sinnot

Another bunch of Outsiders suffer a mauling in Alaska. I’m not just referring to the grizzly bear attacking seven teens in late July. I’m talking about the drubbing dished out by Alaskans who believe a gun is the best — some would say only — insurance against a bear attack.

A flurry of swats and biting comments were delivered in response to articles in the Anchorage Daily News. Within days the first article racked up 945 often acidic jabs. Several follow-up articles provoked another 569 shots. Most of the authors used pseudonyms, but many comments appeared to be written by Alaskans.

What provoked the electronic attack? Seven teens ranging from 16-18 years old were in their fourth week of a wilderness backpacking course sponsored by the National Outdoor Leadership School. NOLS is a highly respected organization that teaches leadership, teamwork, environmental ethics, first aid, and wilderness skills, including bear safety. The group was on the first day of a “student expedition,” which caps the month-long course by permitting the teens to demonstrate what they had learned, without adult supervision. Surprised by a brown bear in the western Talkeetna Mountains, four of the teens sustained injuries. Three members of the group carried a can of bear spray, which none had time to deploy. The teens were not allowed to carry firearms.

Some new shots, as well as a few older ones that I’m finally getting around to processing. 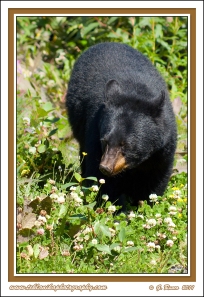 The Juneau man who was accused of illegally feeding black bears pleaded guilty in Juneau District Court on Wednesday to one count of feeding game.

In addition, Hanger was ordered to perform 80 hours of community work service with the Alaska Department of Fish & Game’s Wildlife Division. Hanger was also placed on probation for two years. 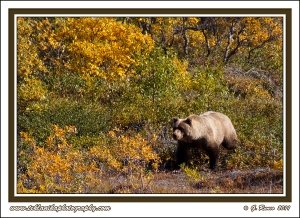 Four years ago the Alaska Legislature offered Gov. Sarah Palin and the Alaska Department of Fish and Game a special deal: $400,000 to “educate” voters on predator control. The money — spent mostly on a video, glossy brochures and public presentations — was meant to persuade and reassure Alaskans that predator control is essential and effective.

Firmly convinced he’s doing the right thing, the new director of the Division of Wildlife Conservation at Fish and Game, Corey Rossi, is taking predator control to new levels. For the first time since statehood, Alaska has targeted grizzly bears for large-scale population reductions, not by hunters but by agents of the state.

The publicity campaign, Rossi, Governor Sean Parnell and the Alaska Legislature would like you to believe that scientific experts on predator and prey populations — particularly the professional wildlife biologists and researchers with the Alaska Department of Fish and Game — unanimously support killing bears to increase numbers of moose and caribou.

But some of those experts have questioned the efficacy and advisability of reducing numbers of grizzly bears in a peer-reviewed article in the latest edition of the Journal of Wildlife Management.

A police officer in Soldotna has shot and killed a large brown bear in a busy residential area after the animal charged him.

Police Chief John Lucking says Officer Victor Dillon spotted the bear crossing into a yard Thursday afternoon. Dillon thought it was likely an injured one that had been reported scavenging in the area for several days. The officer went looking for the bear on foot, armed with a shotgun. The next time he saw the bear it charged him, veering slightly as it approached, and he fired and killed it.

The chief says the bear likely was attracted by a fresh caribou head within a few feet of where the bear was shot. Lucking says someone apparently had just butchered the caribou and the smell and head attracted the bear.